← back to
Kill Rock Stars
Get fresh music recommendations delivered to your inbox every Friday. 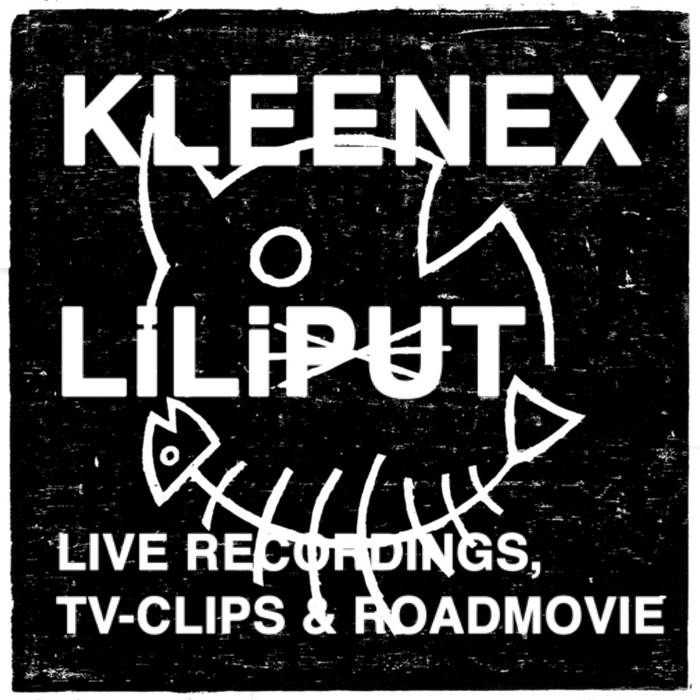 About the Live CD/DVD:
If you've watched any live YouTube footage of Kleenex/Liliput then you know how amazing they were as a live band. If not you're in luck as this CD/DVD set is a testament to their greatness. The CD features two full live sets: Kleenex live in Biel in 1979 and Liliput live in Zurich in 1983, and they include some never before released songs. This is the sound of a world-class band in their prime. The DVD includes the much rumored about document of their European tour in 1982, Roadmovie, as well as live performances of the band on Swiss TV.

Live Recordings, TV-Clips & Roadmovie contains previously unreleased tracks (Lust, Take A Taste of My Mind, Geierwally, Pink Hit, Where Do You Find the Time) and previously unreleased video footage including television studio quality sound and video, and a super-8 film created during Liliput tour, 1982. Also, on May 18, 2010, Kill Rock Stars will be re-releasing Liliput as a four LP set! KRS originally released the record as a double CD back in 2001.
The Ballad of Kleenex/Liliput
The fact that punk rock could capture the imaginations of young people around Europe and America in the late '70's was embodied in the five-year output of Switzerland's Kleenex (later renamed Liliput). The music meant empowerment for many people to take chances and not worry about consequences. This was especially so for women like guitarist Marlene Marder and bassist Klaudia Schiff, the two constants/mainstays of the group

When punk groups began springing up in Zurich, it was a very small scene with a handful of bands that all knew each other, not many places to play and virtually no support from radio stations or the press there. Marder (originally a saxophonist) had played with a group called the Nasal Boys. Two experimental film-makers, Schiff and drummer Lislot Ha had been bouncing around the idea of forming group before hooking up with the appropriately-named vocalist Regula Sing and a male guitarist who had much more ambitious musician plans. Marder liked what she heard from the band and was glad to step in to replace him. Indeed, the group's aim was to have fun, more than to become rich and famous. Armed with a repertoire of four-songs and three chords, Kleenex wowed the local crowds with their simple, child-like rock ditties, filled with joyful chants and nonsense words in the tradition of Little Richard's "Tutti Frutti" but musically more in the noisy, exuberant spirit of their British comrades the Sex Pistols.

Kleenex had local friends who decided to start up a label (Sunrise) where the band put out their first (self-financed) EP in 1978, which included the same four songs from their live sets ("Beri-Beri," "Ain't You," "Hedi's Head," "Nice"). The response was such that the first pressing sold out in weeks. A copy of the EP managed to get to John Peel, the famous English DJ, who fell in love with it and played it over and over for his radio listeners. Rough Trade got wind of their strange, wonderful music and signed the group to a record contract. Their first single ("Ain't You" and "Hedi's Head" from the EP) made a splash with the UK press and led the label to organize a group of dates around Europe with label-mates Scritti Politti and Red Krayola. Not even a year after their formation, the group was already an international sensation even though, at the time, they still held various clerical jobs back in Zurich.

Coming to England, they were unimaginatively dubbed the 'Swiss Slits' by the press and made their next single ("You"/"U", 1979) with Krayola leader/Rough Trade producer Mayo Thompson. Soon, they were off headlining an English 'package tourí with local favorites like the Raincoats, Swell Maps, Subway Sect and Spizz Energi.

After the tour ended in late '79, Sing left the group to be replaced by Chrigle Freund, a recent high school dropout, much younger than the rest of the group. With the loss of their original singer and threats to destroy all their records by the tissue company, which they took their name from, the group rechristened itself as Liliput in 1980, soon adding saxist Angie Barrack to their ranks. This five-piece line up recorded their next single 'Die Matrosen/Split' with its famous nonsense cheers/shouts ('Hotch-potch, Hugger-mugger, Bow-wow, Hara-kiri!'), making a splash on the UK indie/alternative charts.

Despite their success, Ha and Barrack left the group, reducing them to a trio. Their next single, 1981's politically-motivated 'Eisiger Wind' (with its Hugo Ball parody sleeve) caught the attention of noted American rock critics Robert Christgau and Greil Marcus, who praised the innovative trio. By the time the single was released, the band was in the middle of another personnel crisis with Freund now leaving the group. Marder and Schiff closed ranks and assembled a new band with singer Astrid Spirit, drummer Beat Schlatter and saxist Christoph Herzog. After a successful German tour, the later two left the band (though Schlatter continued to help on drums) and the group was a trio again.

After four years, the group finally released a full-length album ('Liliput') for Rough Trade in 1982, leading into another tour. After another single ('The Jatz'/'You Did It', 1983), Marder and Schiff were tired, not having fun anymore and ready to quit. Spirit rallied them to do another record with an advance from Rough Trade Germany. Their second album (Some Songs, which Marder thinks is some of their best work), with various guests helping out and Spirit now playing violin, turned out to be their swan song. Spirit decided that she wanted to raise a family instead of being in a band, spelling the end of the group in late '83. Marder had her own record shop, worked at a jazz club and had a band in the late '80's called Danger Mice. Schiff returned to painting, which she had done for many flyers and sleeves for the band.

Ten years later, Marder (now working for the World Wildlife Federation) and the same people behind the original Kleenex releases put out the 2-CD LiLiPut retrospective on the local Off Course label, including all of the material that the band had released. Though it received rave reviews (including a 'A' from Christgau and a spot on his year-end top 10 list), it was soon out-of-print. Collectors were paying hundreds of dollars in auctions for this material.

"Liliput celebrate the right that rock gives to say anything, expressing their keen, not-humorless intellects through voices and music alike.Their influence can be heard throughout the riot-grrl Diaspora of modern times, but Liliput managed one crucial difference: they made radical social and aesthetic re-engineering sound like the greatest party you've ever been to in your life." —Pitchfork.com

"They convey both raw power and a sense of absolute creative freedom with every track, whether it’s a bouncy more pop-ish number or an angular piece of post-punk. They’re easy to fit within categories of both punk rock and feminism, yet they play with such a carefree, wild attitude that it’s hard to imagine them pausing to intellectualize or categorize what they do." –PopMatters.com

Bandcamp Daily  your guide to the world of Bandcamp